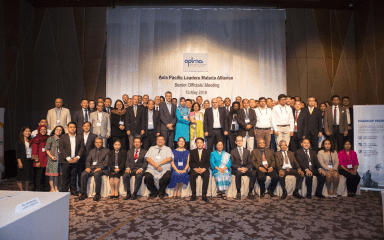 Malaria Week culminated in the 2nd APLMA Senior Officials’ Meeting (SOM), further uniting regional stakeholders behind the Leaders’ Malaria Elimination Roadmap. This was the first meeting since the Roadmap was endorsed by 18 Leaders during the East Asia Summit in November 2015. The SOM brought together officials from health, finance and foreign affairs ministries in 21 countries to review national and regional progress towards malaria elimination and implementation of the Roadmap framework, and to support agreement on priority areas for forward action.

“Elimination must be our goal, not only for our own families and communities, but as an essential contribution to national, regional and global health security,” said Dr. Nafsiah Mboi, APLMA Leaders’ Envoy. “We need leaders and partners at all levels in order to succeed”.

Officials agreed on the process for broad periodic review of the priorities laid out in the Leaders’ Roadmap, and specifically reviewed indicators and milestones for the APLMA Leaders’ Dashboard, a shared tool to track malaria elimination progress in countries and collectively across the entire region.

“Regional and cross border collaboration will be key to successful implementation of this malaria elimination strategy,” said Dr Amnuay Gajeena, Director General, Department of Disease Control, Ministry of Public Health, Thailand. “In this regard, I note the importance of the APLMA Leaders’ Dashboard, which will be a vital tool to maintaining focus and monitoring progress toward elimination of malaria by 2030.”

Also in attendance at the APLMA SOM were other key stakeholders, who play critical roles in supporting regional malaria elimination efforts.

“We need to recognize malaria is more than a health issue. It effects the economy, trade, travel, tourism and the development of nation,” commented Dr Vivian Lin, Director of the Division of Health Sector Development at the WHO Regional Office for the Western Pacific (WPRO). “To eliminate the disease, many areas of government must work together to encourage regional cooperation on migration, foreign affairs, agriculture and other areas.” Dr Lin reassured SOM delegates that WHO as a whole, and its WPRO office in particular, would provide essential support to lead the technical strategy for the regional framework over the next five years.

Although the meeting focused specifically on malaria, the benefits of regional malaria elimination efforts will yield benefits to other urgent public health threats, such as Zika and dengue. Equally, linking the disparate parts of the regional health security agenda together will be critical to sustaining both financing and policy development to ensure malaria elimination.

After the meeting, APLMA will work with the countries in Asia Pacific to take forward the Leaders’ Dashboard. The progress will be reviewed and further refined again during SOM 2017.

“We have priorities set”, reflected Dr Ben Rolfe, APLMA Executive Secretary following the meeting. “One of the critical priorities for taking the Roadmap forward will be to track progress on annual basis through the Senior Officials’ Meeting. It is one of the opportunities during the year to bring this issue to Leaders’ collective attention and take the progressive action towards achieving this critical agenda.”